One Man does not make a Team

Posted on February 14, 2011 by jonhoepfinger 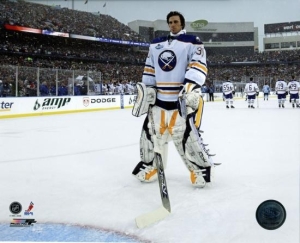 After yesterday’s matinee, the talk is around Ryan Miller, and his struggles. He has a bad game yesterday. No doubt about it. But that’s okay, everybody has bad games. But Miller’s bad games are magnified because you usually lose when your goalie has a bad game.

But all I hear is Ryan has to be there to stop pucks, but why is no one asking, if the team saw Ryan was struggling, why didn’t they play tighter? He over the years has bailed out the defense and forwards for their dumb plays, but they can’t bail him out? Why didn’t Ruff pull him, would Lalime be that much worse? So many people to blame for yesterday.

I know you’re saying, “another Miller apologist”, maybe I am, but if he got traded for a top line center I’d be okay with that.  His career numbers don’t justify being untouchable. The problem is that the Sabres are wrapped in Ryan Miller. He has been the Superstar, the face for 4 years now. The fans are mostly on his side. We have all justified his mistakes. Why? He came and became a part of the community. Someone we could be proud to call a Buffalo Sabre. There haven’t been many of those players in the past 4 years. So maybe we have in general let things slide. Plus last year he was lights out.

One player doesn’t make the team. Even though they have built the team around him. But the Sabres has missed the playoffs 2 of the last 3 years and is currently on the outside looking in. That is not a successful model, when looking at it rationally. Maybe its time for a new direction, top to bottom for the Sabres. If that means shipping off the face of the franchise, then so be it. We’d live, especially if the Sabres get something exciting in return. (First round pick, unless guaranteed t0p 5 is out of the question) This is a team that got rid of Tom Barrasso and Dom Hasek, both better goaltenders.

All this talk is overreaction to me. Ryan usually has his best games after atrocious games like this. Take the Ottawa series in 2006. Terrible game one, then won the series for the team after that. Especially with a spectacular game 2. He is a solid playoff goaltender. But you can’t expect him to fantastic every game. He is not Dom Hasek, who maybe the best of all time. Its an unfair comparison, they are not the same goalie nor the same person.

This talk is going to blow over, unless he pulls a string of sieve like performances. Unless the Sabres are blown away with an offer, he will remain a Sabre. And they will continue be built Goalie on out. (especially if Regier is here)

Ryan Miller isn’t the team, he can’t be, he’s not good enough. So either get him help or get him out of here and start a new direction.

This entry was posted in Uncategorized. Bookmark the permalink.